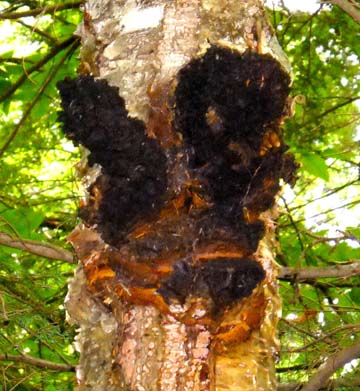 Charge Up with CHAGA!
by Mary Louise;Town Jaqua, Health Minister 10-4-14

Fuel for the body, also known as food, comes
in many forms from many sources, some familiar
and some not. While most people go food
shopping at the local supermarket, a growing
number of avid health seekers are heading to
the forest for their food! They are searching the
woods for hidden, healthy treasures that are
unique sources of powerful superfoods. One
of the most illustrious of these superfoods
is Chaga!

Chaga: What is it?
Chaga is a deep brown-black growth that is
usually found on older yellow and white birch
trees. It is commonly called a mushroom but
more accurately is a polypore, Inonotus oblilquus,
that is considered both a fungus and parasite.The
growth is very hard, dense, and irregularly formed
with a crackled surface that looks like burnt charcoal,
thus earning the nicknames, clinker polypore and
cinder conk.

Chaga is most commonly found in forests of
Russia, Korea, Eastern and Northern Europe,
northern areas of the United States, North
Carolina, and Canada. Chaga has been used
as a folk remedy in Russia and Siberia since
the 16th century.

Chaga: Nutritional value
Because it forms on living trees, Chaga contains
the highest biological activity of all medicinal
mushrooms . It is a whole food which benefits
the entire body, and because it takes many
years to form (at least twenty), its nutritional value
increases exponentially. Thus a 'finely aged'
Chaga canker has a highly concentrated, potent
nutritient level. Some of these nutrients include:

Chaga is best known and most prized, however,
for its highly rare substance called superoxide
dismutase (SOD), a powerful antioxidant
enzyme. It has the highest antioxidant level of
any food in the world. This fact is attributed to
Chaga's formation wherein it synthesizes the
oxygen of its host (a birch tree) and turns it
into SOD. Studies show that 30%- 40% of
Chaga's entire weight is SOD. An Antioxidant
Comparison study conducted by the Brunswick
Laboratory in Canada (utilizing ORAC units per
gram) revealed that antioxidant levels in Chaga
measured 1004 units, Acai 165 units,
Pomegranate 105 units, Blueberries 24 units.

Chaga: Health Benefits
Historically, Chaga has proven itself to
possess remarkable health benefits and
medicinal qualities. While it has a wide range
of applications, Chaga's basic characteristics
can be described as being

These characteristics are largely attributed
the potent presence of superoxide dismutase
found in Chaga which acts to halt free radical
damage in the body. Free radicals are unstable
molecules with mis-firing electrons that attack
the body, causing a condition called oxidative
stress. Oxidation damages body tissues,
precipitating sickness, pain, disease, and
acceleration of the aging process. Oxidative
stress is the body's way of 'rusting' from
within or simply wearing out. Chaga's
exceedingly high levels of SOD halt the
harmful oxidative process.

Allowing for the powerful affect of SOD
within the body, Chaga is known to

The Russians have long discovered that
certain plants which they call adaptogens
help the body fight the affects of stress and
disease. They determined that Chaga is the
most potent adaptogen known and have
subsequently taken advantage of its
remarkable health benefits. Once considered
as one of Russia's best kept state secrets,
Chaga has been heavily used by its military
and champion athletes to build strength and
stamina. Likewise, the 'magic' of Chaga is
familiar to the Poles, Romanians, Koreans,
Japanese, and Chinese. These cultures
have long enjoyed the multiple health benefits
derived from Chaga, namely its ability to build
strength and endurance while concordantly
preventing disease and fighting premature
aging.

Chaga: How to use it
Historically Chaga has been used in many
ways: as a tea, tincture, salve, inhaled as a
smoke, a dye for textiles and paper, tinder
for fires, and incense (though without
noticeable fragrance).

Chaga tea
Chaga has been commonly brewed as a
pleasant-tasting tea by many cultures. The
Siberians drink it daily which is said to
account for their longevity. Siberian Chaga
drinkers live 85 to 100 years, while non
Chaga-drinkers such as the Inuit live only
about 50 years. This discrepancy
in life span is credited to the natural
phytochemicals found in Chaga.

Brewing Chage tea
1. Take a few, small (preferably dry)
chunks of Chaga and place them in a
glass or enamel saucepan. If chunks are
not available, use ground or powdered.
2. Pour at least one quart of filtered water
in the pan and cover with the lid.
3. Boil on medium heat for at least
fifteen minutes but preferably two hours.

Because of its tannic qualities, the tea brews
to a dark amber and has a surprisingly tea-like
taste. Like any tea, Chaga tea can be diluted
to prefered taste. It can be enjoyed hot, cold,
or room temperature. The tea can be used
plain or added to smoothies, soups, and other
raw or cooked applications. Like any beverage,
what is not used immediately should be
refrigerated to preserve freshness. The
Chaga chunks used for brewing can be reused
several times until it no longer yields color.

Chaga tincture
A Chaga tincture is made by using alcohol
and water. While this application involves
processing, it has an advantage in that it
delivers the nutritional value of Chaga in a
concentrated form. A few drops of Chaga
tincture are more potent than consuming the
tea and can be taken sublingually, in
beverages, or applied to the skin as a healing
balm. Tincturing Chaga is easy but the
process should be researched beforehand.

Chaga: Sources
For the adventurous, procuring Chaga can
be as simple as locating a canker on a local
birch tree and harvesting it directly. Before
charging into the woods to chop down some
Chaga, however, personal research is
recommended. Proper identification and
knowledge of harvest methods are important
to learn so as to avoid potential injury.

Those who prefer to let someone else
harvest their Chaga can find it in local health
food stores or on-line. It is available
commercially in ground, powder or chunk
form, commanding an average price of $30.
per pound. Since not all Chaga offered for
sale is the same, purchases should be made
only from reliable, safe sources. Finding
such sources often requires personal
research.

In conclusion
Allowing for the powerful contribution that
Chaga has made for man's wellbeing
throughout history, many cultures regard
Chaga as the ultimate health elixir and
veritable elusive fountain of youth. The
Siberians call Chaga God's Gift or the
Mushroom of Immortality. The Japanese
call it the Diamond of the Forest, while
the Chinese refer to it as the King of
Plants. Its many applications, especially
in regard to cancer therapy, are both widely
known and accepted. A preparation called
Befungin, which is derived from the
substance betulin found in Chaga, has
been used in Russia since the 1960's for
cancer treatment. Likewise Chaga is
applauded as one of nature's best ways
to resolve inflammation and immune
system disturbances.

As the world's most abundant source of
superoxide dismutase, Chaga is a modern
'miracle' for combating the harmful affects
of radiation poisoning. Recent increases in
radioactive fallout around the globe demand
solutions for survival, and Chaga rises to
this auspicious occasion as a natural means
to address an otherwise fatal condition.

In many ways man is subject to his own fate.
What he knows and applies as lifetstyle truth
determines his quality of life and ultimately
his survival. While most Americans are not
familiar with natural, living substances like
Chaga, a growing number of people are
discovering what the ancients have known
and enjoyed all along. That Americans have
been ignorant of the obvious and slow to
accept what is naturally good for them is fact.
Nevertheless, as the wonders of Chaga are
noised about amidst America's increasing
ills, it is possible that Chaga will become a
household word. Help make it happen by
charging up with CHAGA today! 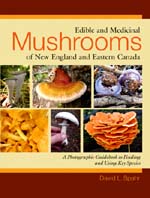 Back to LIVING Letter #71/Index