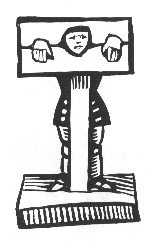 "You mean I've been putting my body in bondage
all this time and didn't know it?"