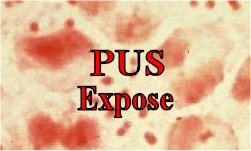 Breaking the law as a matter of course!
By Robert Cohen

Pus in milk? A dairy cow filters ten-thousand quarts of blood through her udder each day and uses dead white blood cells (somatic cells) to manufacture her milk. These dead cells are puscells. Dairy scientists are aware that when one quart of milk is tainted with 400 million or more pus cells, some 35% of the milking cows in the herd are infected with mastitis. Udders bleed, discharges, including bacteria and blood drip into the milk.

The United States Department of Health and Human Services, along with the Public Health Service and Food and Drug Administration, has established a 280 page set of protocols thatis collectively referred to as: The Pasteurized Milk Ordinance (P.M.O.) The foreword of this all-inclusive set ofrules and regulations governing every quart of milk sold in America says:

"Occasional milkborne outbreaks still occur, emphasizing the need for continued vigilance at every stage of production, processing, pasteurization and distribution of milk and milk products."

It is a breath of fresh air to read an occasional governmental truism regarding milk:

"Milk has the potential to serve as a vehicle of disease and has, in the past, been associated with disease outbreaks of major proportions."

This document is more than a guideline for milk producers. It's the law. In the preface, the purpose of the P.M.O. is summarized:

"The Grade 'A' Pasteurized Milk Ordinance is incorporated by reference in Federal specifications for procurement of milk and milk products; is used as the sanitary regulation for milk and milk products served on interstate carriers; and is recognized by the public health agencies, the milk industry, and many others as a national standard for milk sanitation."

Many dairy producers have challenged the laws contained within the all-powerful P.M.O. Courts have clearly maintained the integrity of these sets of laws when asked to do so. On page vi of the preface, the P.M.O. states:

"The Ordinance has been widely adopted for many years and has been upheld by court actions. One of the most comprehensive decisions upholding the various provisions of the Ordinance was that of the District Court, Reno County, Kansas, in the case of Billings et al v. City of Hutchinson et al., decided May 1, 1934. In this action, the plaintiffs unsuccessfully sought to enjoin the enforcement of the Hutchinson ordinance on the grounds that it was unreasonable..."

The courts have repeatedly upheld the sanctity of this set of laws. The dairy industry continues to ignore the spirit of the laws so enacted. To date, no individual or group has challenged national enforcement of these statutes. There is a first time for all things. The table of contents (page vii of the preface) lists the standards for Grade A milk, and defines "Abnormal Milk" on page 20. The standards for Grade "A" raw milk for pasteurization define abnormal milk this way:

"Lactating animals which show evidence of the secretion of abnormal milk in one or more quarters (the udder is divided into four quarters), based upon bacteriological, chemical, or physical examination, shall be milked last or with separate equipment and the milk shall be discarded."

The above is further explained ("Public Health Reason"): "The health of lactating animals is a very important consideration because a number of diseases of lactating animals, including salmonellosis, staphloccal infection and streptococcal infection, may be transmitted to man through the medium of milk. The organisms of most of these diseases may get into the milk either directly from the udder or indirectly through infected body discharges which may drop, splash, or be blown into the milk."

What is "abnormal milk?"

"According to the PMO, all milk from cows producing 'abnormal' milk should be dumped."

Linn compares "wholesome" milk to "abnormal" milk, and reveals insider industry standards shared by the National Mastitis Council, United States Department of Agriculture, and Food and Drug Administration. If cows are infected, milk is abnormal. This is a dirty secret that government agencies conspire to keep from the dairy-eating public. Dr. Linn writes:

"Research has shown that, with a herd cell count of 200,000, there may be as many as 15 percent of the cows infected. In herds with a 300,000 count, this figure may be as high as 25%." ("Cell count" refers to the number of somatic cells, dead white blood cells per milliter of milk). So, if 25% of the cows in your state are sick and producing abnormal milk which should be dumped, and that milk is not dumped, something is seriously wrong with the system. It is clear that some states in violation of these rigorous milk standards.

Is your state in violation? If the cell count is over 200,000 in your state, please send a formal complaint to your Department of Agriculture. Start with a phone call. The number should be in your telephone book.

How do you learn the average cell count of milk sold in your state? That's easy. The April 25, 2002 issue of Hoard's Dairyman lists every state in America on page 342.